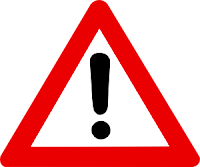 At the University Senate meeting this past Wednesday President Wolfson asked the Provost if the Career Development Proposals that were put forward by the CD Committee last week were going to be funded for this summer & AY2015-2016. The question was asked because the Local was informed that people who called the Office of Research and Sponsored Programs were told that the funding was in jeopardy because the Statewide Master Agreement expires June 30th. The Provost responded by saying that it is a "negotiable" issue and did not answer what hispreference would be if he were to make the decision.

The Local's position is unequivocal in that the provisions of the contract continue as per Article XLIII of the Statewide Master Agreement "Duration and Termination" clause excerpted here:

The Provost was asked followup question about approved Sabbaticals for AY 2015-2016 and the Senate was told those were also subject to "negotiations". In light of his comment, the Local has asked the administration to publicly clarify its position so that those that are expecting CDC or Sabbaticals can effectively plan for those awards. The Local suggests that before anyone incurs any irrevocable expenses that they check with the Provost before committing personal funds. To be clear the Local believes Article XLIII assures that CDC and Sabbaticals are funded until a successor agreement is signed and that the University should be public about its intentions so you can make effective plans.

We are committed to keeping you informed about this issue and when we have definitive information, you will hear it from us.

Congratulations to our 2015 BKMUW Scholarship Recipients! 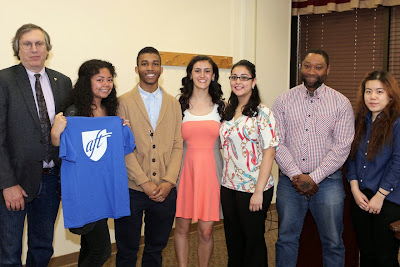 Learning is not attained by chance, it must be
sought for with ardor and attended to with diligence.
-Abigail Adams-

Last week the Local welcomed this year's recipients of the BKMUW scholarships, each a student who has shown determination in their studies and has worked to support their own education.

The recipients for the BKMUW Scholarship are full-time undergraduate students working to pay for their enrollment and possessing proven academic achievement. The 2015 honorees include Jung E. Kim, Blanca Mendez, Christopher Serrano, and Danielle Vaccaro.

The Nick Yovnello-CNJSCL Scholarship, funded by the Council of New Jersey State College Locals, was awarded to Cynthia Huasipoma.

The Ellen Kerns Nunn Award, offered to a student who meets all previous criteria and who is a single parent during their enrollment, went to Jamal Oliver.

Each student will receive a $500 credit toward their student account. AFT Local 1904 again congratulates this year's winners for their hard work and wishes them continued success in their chosen fields. Also, a big thank you to all who have donated toward the scholarships as your efforts continue to support hard-working and deserving scholars at MSU.

On Saturday, April 25th, volunteers from Local 1904 went to help the Community FoodBank of New Jersey and joined members of Montclair State's chapter of Sigma Phi Rho (ΣΦΡ) and the Human Relations Leadership Development Association (HRLDA) in packing out boxes of food for local communities. A big thank you to Eli from the CFBNJ for directing our efforts and helping us to make a difference in our community. 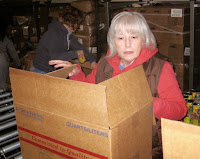 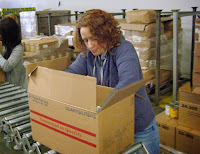 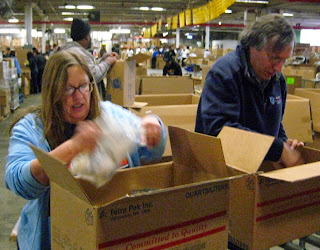 A Debt of Thanks - Honoring Dr. David Benfield 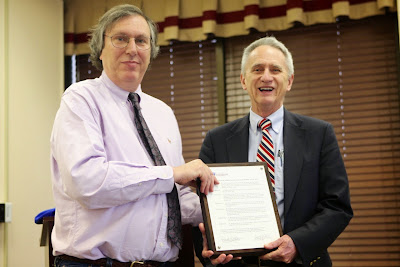 The May General Union meeting also provided an opportunity to celebrate the contributions of one of our own as Dr. David Benfield celebrated his retirement at the end of this semester, serving for over 40 years at Montclair State. Rich presented a resolution honoring Dr. Benfield's work and thanking him for his decades of service to our learning community and the Local. 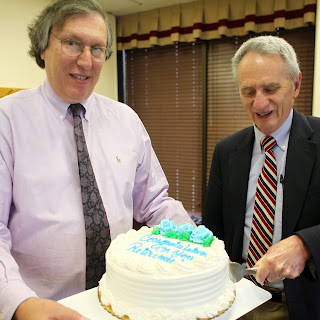