AFT Local 1904 is very pleased to have awarded a total of nine scholarships in 2017! Recipients were acknowledged at our Membership Meeting on Wednesday, May 3rd, 2017, in University Hall. 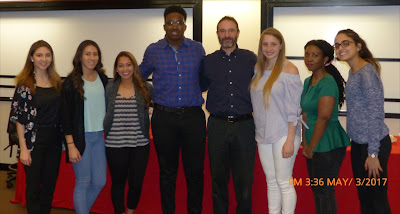 Recipients are all undergraduate students in various majors, in good academic standing, with strong scholastic aspirations, and who have demonstrated that they would substantively benefit from the support of the scholarship as a resource.

The BKMUW scholarship fund was established in 1997, in honor of Catherine A. Becker, James P. Keenen III, Joseph T. Moore, Anita E. Uhia, and Connie Waller, all former faculty and active union members who were deeply committed to the principles of collective bargaining and to helping our students who demonstrate a significant economic need. The Yovnello and Nunn awards were established shortly following the BKMUW.

Congratulations to all nine recipients!

Carimer Andujar, a 21-year-old Rutgers junior, has been ordered to appear at the NJ Immigration and Customs Enforcement (ICE) headquarters at the Federal Building in Newark, 970 Broad St., Tuesday, May 9, 9am for a mandatory meeting with a deportation officer. ICE has provided no explanation for this meeting with Carimer, a law-abiding social justice activist and engineering major who is president of UndocuRutgers, an advocacy organization for hundreds of undocumented students at the State University of New Jersey. Carimer is working closely with the faculty union, Rutgers AAUP-AFT, to turn out mass support outside the Federal Building on May 9 at 8:30am.
Though Carimer has dutifully filed all paperwork to renew her Deferred Action for Childhood Arrivals (DACA) status, it expired on April 28, leaving her vulnerable to the possibility of detention or even deportation.
Carimer came to the U.S. from the Dominican Republic with her family at the age of four. "No one can tell me that this is not my home and that I don't belong here,” she told an overflow crowd of 150 students and faculty who gathered at the Rutgers AAUP-AFT union office for an emergency response meeting on April 25th. The faculty union and student activists at Rutgers are mobilizing a #StandWithCarimer solidarity campaign and  mass turnout for her May 9th meeting outside the Federal Building at 970 Broad St.
Rutgers AAUP-AFT president David Hughes is concerned that Carimer is being targeted by ICE for her activism against President Trump’s immigration and other policies. “The Trump administration is trying to come between faculty and students, and between students and their own education, and we don’t accept that,” he said. “That attack on Carimer is an anathema to the value of Rutgers and the value of higher education altogether, so we are saying that in order to deport Carimer they are going to have to come through the faculty, obviously come through the students too.”
Days after Trump was elected president in November 2016, more than 2,000 students and faculty at Rutgers University walked out of class to demand the school become a sanctuary campus, and Carimer was among those leading the largest protest the campus had experienced in decades. Two months after the walkout for sanctuary, Carimer stood alongside Arab and Muslim students and professors at another mass rally and march, demanding "No ban. No wall."
"There is no other reason for requesting me to speak with a deportation officer," Carimer said. "The only difference between me and other DACA students would be that I am outspoken." 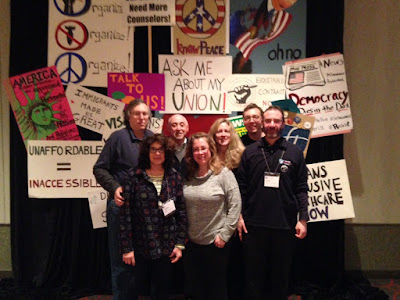