Local AFT 1904 Supports Student Attendance at March for Our Lives 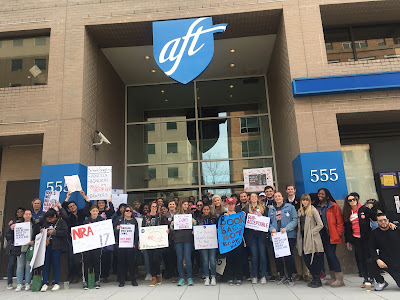 On Saturday (March 24, 2018), at 6:00AM, forty-nine of us boarded a bus, chartered by the AFT Local 1904, to participate in the student-organized, student-led March of Our Lives at Washington, D.C.

Our group consisted primarily of Montclair Students--many from various organizations on campus, such as the MSU branch of the NAACP, Kappa Delta Pi and students from the Women and Gender Studies program. Also part of our group were several middle school age students who are family and friends of adults in the group and MSU faculty and officers of the Local who were attending to support the students.

AFT National''s headquarters, just blocks away from the event, served as a "home base" for AFT members from around the nation and provided a generous assortment of snacks, drinks, sign making materials and a quiet space set aside for march participants in need.

We successfully joined an estimated 800,000 marchers on Pennsylvania Avenue marching for gun reform, and social justice. The program consisted of moving and powerful addresses by students from Stoneman Douglas High School of Parkland, Florida, other students from around the nation, and various celebrity artists who raised their voices in support of the movement. The event was historic, and perhaps the beginning of a new wave of progressive change in the United States.

We are pleased that MSU was well represented there, and that our Local was able to play a vital role in facilitating our group's attendance.

A deal was reached tonight to end the Jersey City teachers' strike after a 13-hour negotiation session Sunday between school district and union officials.

The tentative agreement on a new teachers' contract, if approved by the nine-member school board and members of the teachers union, would end an eight-month dispute between the 29,000-student district and its 3,100 teachers.


The full story is here

After nine days on strike, West Virginia teachers—among the lowest paid in the nation—have won sorely needed salary increases and the promise of more affordable health care. In a state with a history of union allegiance, their solidarity resulted in a 5 percent raise for all state employees. “That victory is a testament to the voice and determination, the resilience and compassion, and the collective power and organizing of the educators of this state,” said AFT President Randi Weingarten, who was with the strikers when they settled. Referring to the U.S. Supreme Court case attacking unions, she added that the win has implications beyond West Virginia. “We will rise up.”