View from a Rally 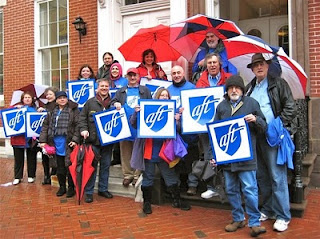 March on Trenton In Support of Public Employees in Wisconsin on February 25, 2011
Neither rain nor wind could dampen the spirits of those there shouting their support of public employees throughout the nation. Though the news reports claimed there were 3,100 umbrellas, there were far more people than umbrellas.

Wisconsin: Why should we care?

Because Governor Christie does.

Governor Scott Walker’s proposal in Wisconsin includes no less than the outright elimination of collective bargaining for public employees. If this proposal were to be enacted in New Jersey, it would not allow us to bargain on issues like health care, sabbaticals, career development, tuition reimbursement and other things that we have worked hard over many years to include in our contracts.

Everyone understands that there are severe monetary problems in Wisconsin, here in New Jersey, and in dozens of other states. In Wisconsin the unions have pledged to go to the table and work with the governor. But that is not good enough for him; this suggests to me that it is not solely about money, but also about the annihilation of unions, the furthering of a far-right political agenda, and defaulting on the significant pension obligations that workers have paid into and have every expectation that they will collect.

Governor Christie is watching closely and next salvo will be in his budget speech tomorrow (Tuesday, February 22nd. Live on NJN @ 2:00PM). Listen closely when he speaks about health care costs. Our plan, the New Jersey State Health Benefits Plan, is owned by the state and only administered by Blue Cross. Our benefits have been slowly eroded in the last few years. In Wisconsin they are proposing that their state health plan be eliminated and that those who were enrolled look for private insurance in the newly formed health care exchanges. We would no longer have the power of all NJ workers being in the same plan and we would surely end up in plans that cost more and cover less.

Governor Christie will also likely talk about education reform and place the blame for failing schools on the backs of teachers. He will support charter schools, vouchers, and the elimination of tenure as his ideas for reform. That many of our failing schools are in our cities where much of the population exists at or below the poverty level doesn’t seem to warrant his consideration. And if the legislature opens up the tenure legislation, who knows where that will end? Are you willing to have your tenure protections weakened because it is politically profitable?

We are not talking about furloughs or even a slight increase in health co-pays anymore. We are talking about eliminating or weakening all the protections we earned in working for many years within the collective bargaining process at the bargaining table with each of our governors. Governor Christie is watching Wisconsin, and if the Governor is successful there, it will embolden ours to push even further here. Last week, Governor Christie spoke to a group of conservatives. He said, "It’s time to do the big things, the really big things…."

It’s time for us to do big things, too. This Friday there will be a rally at the State House at noon in support of worker rights in Wisconsin. Politicians understand only two things: money and votes. Your COPE contributions are more important now than ever. I’ll be there standing with my brothers and sisters in the CWA and organized labor in New Jersey, and I hope you will, too. If there are enough of us going, we’ll see if we can arrange transportation. Please call Linda Turano in the Union office (x4453) and let us know that you plan to go. And if there are enough of us and we can set up transportation, we’ll contact you immediately.

Last week, I sent out a memo about the election for the University Professional Staff Review Board (UPSRB) that is supposed to occur by February 15, 2011. Upon contacting the administration about conducting the election, I was informed that their position is to not constitute this board and remove it from our Local Selected Procedures Agreement. After meeting with Judy Hain on February 9, 2011 I told her the Union refuses to accept the removal of this contractual item. We mutually agreed to a delay in the election of the UPSRB.

It is during this time that I would like to hear from you about this matter and other contract items as well. Please join me for a special meeting on Friday, February 18, 2011 in Student Center 419 at 1:00pm. In order to familiarize yourself with the UPSRB, I strongly encourage you to read Section 1.3.2, beginning on page 3 in the LSPA 2003-2007 found online: http://www.aftlocal1904.org/contracts/LSPA-MSU-2003.pdf.

I look forward to seeing you there! Beverages and cookies will be served!

The Special Election was held today, Wednesday, February 2, 2011, and the vote was unanimous in favor of the three unopposed candidates. AFT Local 1904’s newly elected officers and delegate to the Council of New Jersey State College Locals (CNJSCL) are:

William Sullivan - External Vice President and Delegate to the CNJSCL