At the October 27th Board of Trustees, President  Rich Wolfson's statement reiterated his concern for transparency concerning Board actions and called for a systematic public evaluation of the President, Provost, appropriate Vice-Presidents, and Deans in a comprehensive, transparent process.

The full text of his statement is available here.

Solidarity Walks in the Rain? No problem!

Neither rain nor sleet nor snow nor gloom of night.... 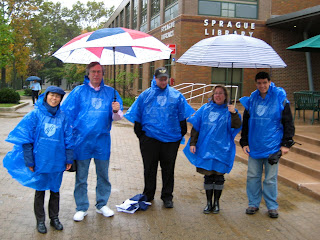 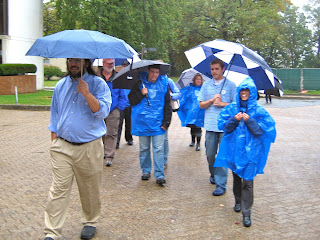 Nothing keeps our Solidarity Walkers away from good discussions, burning some calories and showing solidarity.

Unity at Work That Matters Celebration

Members of AFT Local 1904, CWA 1031 and IFPTE 195 came together on Monday, October 17th to celebrate that the work they do matters. Pictured above, from left to right are Bobby Hill, John Dennis, Randy Young, Cristina Molinari, Eric Samuels, and Rich Wolfson.

75 to 100 people were there to hear the music of Julian Keenan and Adam Mayer with some backup vocals from Betsy Montanez who channeled a bit of Janis Joplin.

Jennifer Higgins gave a thoughtful speech on working people standing together for a "Square Deal".

AFT Local 1904's weekly Solidarity Walks on Wednesdays have been announced in The Clifton Journal. Please join us as we work towards getting MSU's administration, our colleagues, students, family and friends to understand how much the work we do matters, because our success equates to student success.

The presentation of AFT Local 1904's resolution has been reported in The Montclair Patch and The Maplewood Patch. 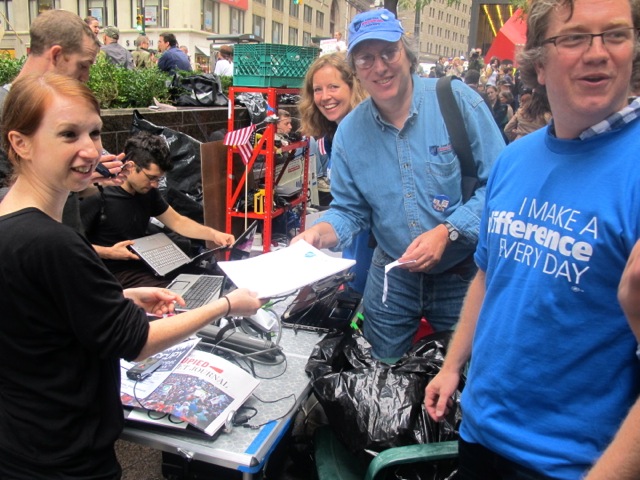 WHEREAS, The Occupy Wall Street protest and sympathetic actions in cities across the United States express the real distress that the current economic malaise is causing for the majority of the population; and

WHEREAS, there is a growing awareness that the pain and sacrifice has not been borne equitably across all economic strata; and

WHEREAS, those most responsible for the economic stress our country is now enduring have not been held accountable for their actions; and

WHEREAS, public sector employees, reeling from reduced state and federal revenues due to economic contraction, have been weakened and reduced at a time of increasing need; and

WHEREAS, this current crisis has been used as a pretext to layoff, cut the wages and restrict the rights of public-sector workers; and

WHEREAS, while the Occupy Wall Street movement was initiated by youthful activists, organized labor and progressive organizations have embraced and supported this movement as coincident with their own goals for a fair and equitable economy as well as reform and accountability measures to mitigate further and repeated crises; and

WHEREAS, we are in an unemployment crisis where almost 14 million people are unemployed, including nearly 20 percent of African American men and over 25 percent of our nation’s youth; and

WHEREAS, corporations are permitted to spend unlimited resources to influence elections while stockpiling over a trillion dollars rather than creating jobs;

THEREFORE BE IT RESOLVED that AFT Local 1904 members find the actions of Occupy Wall street an appropriate expression of discontent for all Americans especially and particularly for those who have been left behind in our current economic circumstances; and

BE IT FURTHER RESOLVED that AFT Local 1904 understands that Occupy Wall Street is calling for systemic change and joins its brothers and sisters of the AFL-CIO, Teamsters, CWA, New York State United Teachers and other state and national federations and Unions, strongly commends and supports the Occupy Wall Street protest and the solidarity actions of organized labor; and

BE IT FURTHER RESOLVED that we support the activists’ non-violent efforts to seek a more equitable and democratic society not based on corporate greed; and

BE IT FURTHER RESOLVED that the local, through its members and representatives, will urge the NJ Council of State and College Locals and the New Jersey AFT State Federation to similarly express strong support of and solidarity with the protest and the larger movement; and

BE IT FINALLY RESOLVED that Local 1904 will endeavor to support and assist the protest in the furtherance of the demand for an economy that works for all people, including a strong and effective public sector, by using whatever resources Local 1904 members find appropriate.

Click here for the .pdf copy of the resolution.

Work that Matters - A Celebration!

On Monday, October 17th from 12:00 to 2:00 p.m., AFT Local 1904 will be hosting an event featuring the musical stylings of your union brothers and sisters to celebrate that the work we do matters. Headliners include Adam Mayer and Dr. Julian Keenan.  Wear your AFT shirt or a blue shirt, bring your lunch and grab a beverage and a snack courtesy of your union and enjoy the music as we recognize that we do work that matters.

Please announce this event to your students. They are welcome to and encouraged to attend.

If you would like to perform, please contact Jennifer Higgins at: jennifer.higgins@aftlocal1904.org to reserve your spot in the line up.