Yesterday, Members of CWA, joined by various other members of organized labor and of the greater community, rallied in Trenton for a fair budget to be passed this budget season. The legislature must pass a budget by June 30th, or the State is at risk of a shutdown for the third year in a row. Governor Murphy’s proposed budget makes investments in public education and services, and funds public worker pension and our state employee contract while asking millionaires to pay their fair share in taxes. By contrast, Senator Sweeney’s “Path to Progress” proposal calls for ending the current public worker pension system for state, county, and municipal government employees and shifting billions of dollars of healthcare costs on to workers—all while protecting billions of dollars of tax cuts for the super wealthy and corporations. Members of the AFT Local 1904 joined together with CWA and others to rally for a budget aligned with the Governor’s proposal, that includes prioritizing public employees. 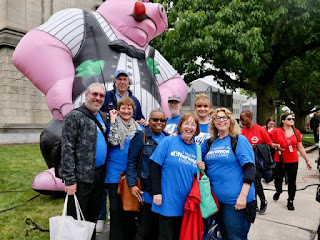 Madeline Adams-Gurowitz, daughter of Keith Adams (an Instructional Designer in the IT department of MSU) received of one of 11 scholarship announced last Sunday at the Essex West Hudson Labor Council Scholarship Breakfast at the Chandelier in Bellevile. Madeline is attending Connecticut College in the fall, and we are proud that she was selected for this prestigious award. Madeline is shown here with NJ Assemblyman Thomas P. Giblin (leftmost) and Walter Genuario (rightmost), Chair of the Labor Council Scholarship Committee. 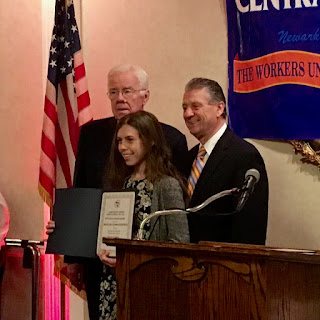 I Scream, You Scream, We All Scream "Happy Summer" at Professional Staff Ice Cream Social

Sponsored by the AFT Local 1904, members of the MSU Professional Staff community took a well-deserved break to enjoy some ice cream and socializing with colleagues, and celebrate the beginning of their Summer schedule. The ice cream social took place on the afternoon of Thursday, June 6th, 2019, at the back patio of the CELS building. A uniformed ice cream professional served the ice cream out of an authentic, old fashioned Good Humor truck. The truck also provided a medley of recorded classic tunes from the 1950s and 1960s. Happy Summer, everyone! 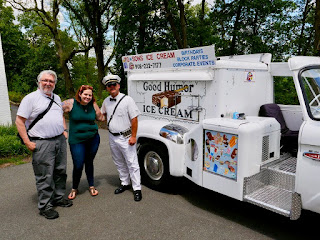 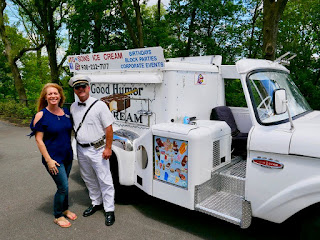 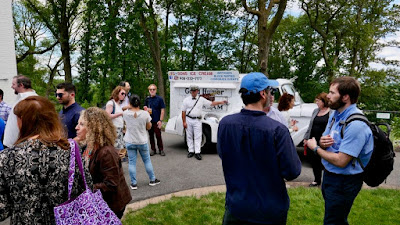