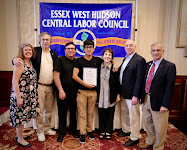 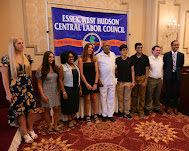 This morning the Essex West-Hudson Labor Council had its annual Scholarship Breakfast where Pablo Romero, son of Professor Debra Saivetz, received a $1000 scholarship. He is planning on attending Montclair State as a pre-med student. Ex-Mayor of Newark Sharp James was in attendance and was asked to say a few words by Assemblyman Tom Giblin. Mayor James talked about "paying it forward," and announced he was doubling the scholarship for each recipient to $2000. It was an exciting surprise for everyone in the room particularly the parents of the scholarship awardees 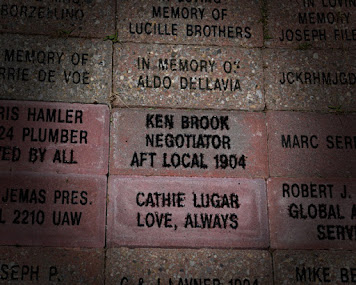 Negotiator Emeritus Ken Brook was honored today with a brick in the Silk Walk at the National Labor Museum, Botto House for his work over the years as the Chief Negotiator for our Local. Joe Moore was there there to receive the certificate and say a few words about Ken who could not attend. Joe was a long time active member of the Local before his retirement and was the President of the Montclair State Faculty Association a precursor organization before our affiliation with AFT and becoming Local 1904.